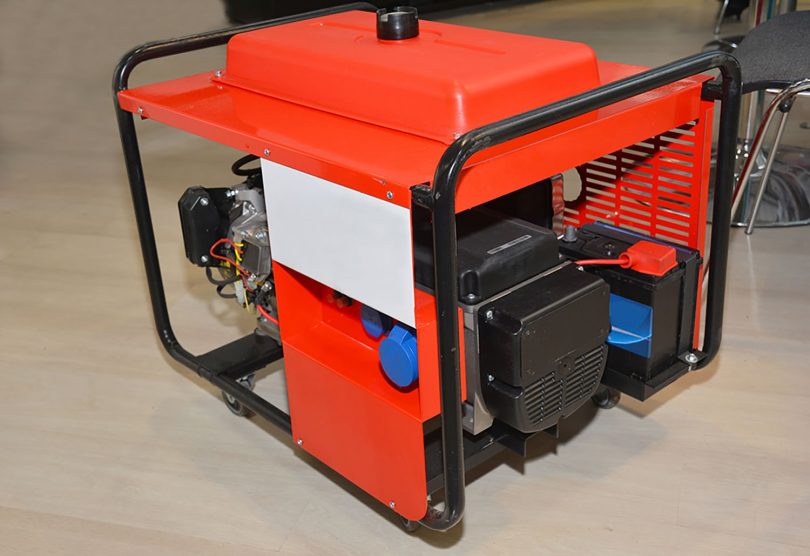 Running generators outdoors comes with its challenges, be it security or the risk of getting wet. These ideas make most generators owners think of running theirs indoors. If it’s raining or the available spot for placing the generator isn’t safe, you might have wondered if you can run a generator inside your house.

The short answer is No! You cannot run a fuel generator indoors. Generators that run on gasoline, diesel, propane, or natural gas produce carbon monoxide, an odorless and invisible gas that can KILL YOU IN MINUTES. That’s why you MUST NEVER run a generator inside your house, no matter what your reason is.

Running a generator inside your house puts you and your family at the risk of carbon monoxide poisoning and death. That’s why it’s recommended you place the generator outdoors and a distance (10 feet) away from your home. This post is here to elaborate on the reasons why you must avoid running your generator indoors.

Why Running a Generator inside Your Home is Dangerous?

Those generators burn fuel to produce power consumed during an outage or when there is a need for off-grid power. The fuels include gasoline, diesel, propane, and, but are not limited to, natural gas. As the generator burns either of these fuels, it produces energy; they release carbon monoxide as the byproduct in the process.

Carbon monoxide is an odorless, invisible gas potential of causing CO poisoning or death. When you use the generator indoors, these gas can accumulate, thus putting your family and yourself at risk.

It gets worse; gas can stay inside your home even after you’ve turned off the generator. According to research, opening the windows and doors to allow the gas to leave won’t. It would be the same result if you tried to accelerate it with a fan.

The fact is the amount of carbon monoxide gas produced by a generator is quite high. And you know what? You cannot see, smell, or taste carbon monoxide. The worst is, it can kill you within minutes or incapacitate you in seconds when the right concentrations are met.

The sad news is, even though the agencies and manufacturers emphasize never running a generator indoors – inside your house or in those partly enclosed spots such as basement, garages, crawlspace, porches, or sheds, not to forget partly-enclosed spaces like breezeways or carports.

Your generator has to be placed a distance from the house, in an open area downwind from any structure.

When used in a confined space, generators can produce high levels of CO within minutes. When you use a portable generator, remember that you cannot see or smell CO. Even if you do not smell exhaust fumes, you may still be exposed to CO.

When you run your generator in confined spaces, it produces high levels of carbon monoxide in minutes. It does tend to accumulate under enclosed spaces even for minutes after the generator is shut off.

And with carbon monoxide being a poison that you cannot smell or see, it’s potential of killing you in minutes even if you run the generators with windows and doors wide open.

According to Consumer Product Safety Commission (CPSC), a generator produces 277 – 625 times more carbon monoxide than a car. That means running a generator indoors for a minute is running a car inside the house for days.

And according to CPSC research findings, from 2007 to 2017, 90-147 people died each year because of carbon monoxide poisoning from running portable generators indoors. Besides that, 8,703 injuries were reported during this period as the effect of breathing in carbon monoxide from generators.

Most of these deaths (75%) occurred at home, with 35% because some people decided to run the generator in their house (living quarters) and 25% from running the unit in the basement assumed to be sealed off enough to protect the living area against CO.

The portable generators must also have a warning label informing the buyers that using a generator indoors is dangerous and can kill you in minutes. It also has stated that generator exhaust contains carbon monoxide, a poison you cannot smell or see. It must warn them not to use the units inside your house or in a garage, even when the doors and windows are wide open.

Even though the CPSC commission believes that this mandatory labeling for portable generators can help reduce CO poisoning incidents and deaths, they also discuss some evidence that it’s not enough to address the carbon monoxide poisoning hazard.

U.S. Environmental Protection Agency (EPA) emphasizes that the generator must be used outdoors and away from the house. It needs to be 1.5-feet away from the home and 5-feet away from any windows, doors, and crawl space vent openings. All these are primarily to protect you and your family from carbon monoxide poisoning.

It gets even worse; carbon monoxide is not only poisonous but also flammable. If your space was to catch fire because of the generator or something and carbon monoxide, the fire could spread quite easily and fast. So, if the gas won’t kill you, you might get burnt alive by a fire outbreak, which is possible to happen if you store fuel in the same room as the running generator or an accident.

It means a generator gives off roughly 277-625 times more of the killer gas than an old car model because of inefficient fuel combustion that occurs in those small engine generators. The margin gets even bigger today, with modern cars having computer systems designed to fine-tune the fuel combustion process to lower the emissions.

The fact is that car engines have a higher fuel efficiency rate and better combustion than a generator. That’s why they give off less carbon monoxide, and yet most of us never think of running them inside the garage, even with the door wide open.

According to U.S. Consumer Product Safety Commission (CPSC) research, from 2005 through 2016, most of the fatalities recorded due to weather-related issues and power outages were caused by the ice, storms, and hurricanes, while the second most fatalities came as the result of CO poisoning.

That means carbon monoxide poisoning has been a serious issue that comes from using a generator wrongly.

Get me right – YOU MUST NEVER RUN A GENERATOR INSIDE YOUR HOME. However, you can run it at a distance away from the house. And even though it’s outdoor, it’d be best to protect your loved ones and yourself from the killer gas always. So, what should you do? Follow the following safety tips: