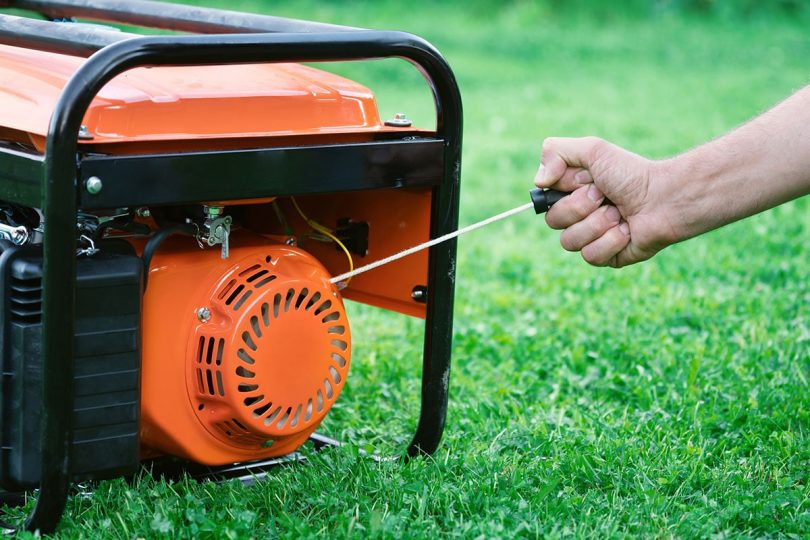 Generators, like any other machine, are prone to develop issues that will leave is desperately frustrated. One of them is the recoil starter becoming hard to pull. At times you may be able to start the engine even though it’s hard to pull, but at some point, it will not. And that’s why you’ll start asking yourself, ‘why is my generator so hard to pull?’

Your generator can be hard to pull if it experiences one of these problems:

If your generator was to experience any of the above issues, it could make it hard for you to start the engine using the recoil start. It’s something quite common that you think. And the worst is, it can make you think your generator is beyond repair.

So, before you spend your hard-earned money visiting a generator repair shop, read this post and see if you could solve the problem DIY.

Why is Your Generator So Hard to Pull Start?

Before you can tear down the generator or before you rush it to a repair shop, here are the common issues that might be making your generator hard to pull:

Your generator might be hard to pull because of the recoil starter itself. If the recoil rope gets tangled, the spring or the spring hooks brakes, you can have issues pulling it to start the engine.

The entanglement can be caused by greasing or debris between the spring rolls. To check this, you need to take out the recoil starter assembly by removing the 10-mil bolts holding it to the generator.

Once the assembly is out, there is a bolt at the center that you’ll also need to remove to gain access to the spring itself.

If the springs are gummed up with grease, spray some lubricant to release it. If there is debris present, take a brush and clean them.

The first thing to do here is to open the assembly and check for any damages. While checking for any compromises, you can add some oil to loosen the spring.

If there is no gumming, what’s the status of the spring? It should be a single rolled spring. If you get two or more pieces, then it’s broken, and you’ll need to get a replacement.

If the spring itself is okay, check the two spring hooks. The first one holds the spring start and the second one, at the center, holds the other end of the spring.

If any of the two is broken, then you might be forced to invest in a new recoil start assembly for your generator.

What is the status of the starter recoil assembly? Okay? Another possible cause of the hard pull-start, which is a hydrolocked engine, is working fine.

But first, what does a hydrolocked engine mean?

Hydrolocked engine is when gas, liquid oil, or water sits on the piston head inside the combustion chamber.

The piston is designed to compress gasses only. So, when liquids such as oil and gasoline find their way into the combustion chamber, the piston won’t be able to compress them.

The situation makes it hard to pull the recoil starter cord, and if you force it, the rope or your arm’s tendon should snap.

How do you fix a hydrolocked engine?

The first step is to remove the black rubber boots snapping onto the spark plug. Once that is off, use the spark plug wrench to remove it. You can also use a ratchet or a deep-well socket.

Get a flashlight and examine the combustion chamber through the spark plug hole to see any liquid in there. Try shaking the generator gently to see anything is moving.

If there is liquid, get a clean rug and attach it to a thin stick. Dip it down the combustion chamber through the spark plug hole.

This step will help you identify the type of fluid to make it easy to diagnose the problem easily. Oil, gasoline, or water – what is it?

Now that you know the type of liquid preventing the compression, you can go ahead and remove it by pulling the starter cord gently. If the Hydrolock was the problem, the pull should get easier. If not, then jump to the next possible problem.

But if it’s Hydrolock, continue pulling the starter recoil cord until all the liquid splashes out. Once you see nothing coming out, return the spark plug and reattach its boot. Try pulling the cord again to fire up the generator.

Don’t worry about the smoke show. It’s produced when the engine burns any oil left in the chamber or unburnt fuel escaping from the chamber.

What Causes Generator Engine to Hydrolock?

Generator Tipping or Hard-Angle Tilt: Your generator can Hydrolock from oil if you tipped it over or tilted it on a hard angle for an extended period. The oil in the crankcase could seep up past the engine piston rings into the combustion chamber.

If you found that oil was the cause of the engine hydrolocking, flushing it out through the spark plug hole should be enough. But don’t forget to check the oil levels.

The same could happen if you overfill the engine with oil, especially if you do it while you tilt it at an angle to make the refill convenient.

Avoid this by placing the generator on a level surface and adding as directed in the manual, normally to the dipstick threads. Use an oil-adding funnel to make the process easier.

Malfunctioning Float Needle Valve: if gasoline is the cause of your engine hydrolock, there is a high chance your carburetor float needle valve is malfunctioning. If that were to happen, it wouldn’t be able to stop the amount of gasoline entering the carburetor’s throat.

If the liquid inside the generator combustion chamber were gasoline, it’d be best to clean the carburetor. Also, change the engine oil since some gasoline might have seeped into the crankcase.

Hydrolock can also be caused by water being inside your combustion chamber if you left your generator outdoors and water can enter through the exhaust if it rains hard enough. That water can also lead to rust which can also seize up your piston, but we’ll get to that later.

Generator left outdoors: if you left your generator out in the rain, the water could rainwater can seep through the exhaust and get onto the piston via the exhaust valve. It can accumulate to a point where it causes the hydrolock.

The worst could also happen when it leads to rusting seizing the piston. That’s why, if you find water in the chamber, you flush it out right away.

If you have to run your generator when it’s raining, get a generator enclosure that can help protect it from rainwater and other weather elements.

If the recoil starter assembly is okay and there are no hydrolocking issues, the next possible problem might be with the generator engine’s flywheel or its key. Check to make sure there are no damages.

The only way to access the flywheel is through the starter recoil assembly. You will also need to remove the fan disc and the starter cup.

The process is as easy as it sounds. Once the recoil starter assembly is out, you should see the starter cup and the fan disc, the only items covering the flywheel. The flywheel connects to the shaft. On the shaft is a flywheel key that holds the flywheel to it.

If none of the above was the culprit for the hard pull-start, it might be more serious. It might be that the engine piston is seized.

It happens when the generator runs on low oil or without oil, leaving the piston unlubricated to the point that it moves up and down the cylinder slowly or not at all.

Most of the time, this can be prevented by the low oil sensor in a generator, but with time the feature can fail. That’s why it’s always best to check the oil level before starting the generator.

So, place your generator on level ground and check the oil level. If it’s low, get the recommended oil type and weight and fill the generator accordingly. It will also help if you add a tablespoon of oil into the combustion chamber.

Allow the oil to sit for some time before you can gently pull the recoil cord with the spark plug out to check if the lubrication you added has allowed the piston to move freely.

If the recoil starter hasn’t improved, you’ll need to open the engine head to check the status of the engine cylinder, especially if you suspect the engine was run without oil.

The seizing could also be caused by rust on the piston that can happen if water found its way into the combustion chamber through the exhaust or if the generator stayed without oil for long.

Even though it’s rare, your generator’s camshaft compression release could get damaged and cause the drag on the recoil starter.

The camshaft release is responsible for opening the valve when you start the generator with the recoil cord. If it doesn’t allow the perfect seal when the piston is in the compression phase, it could make it hard to pull the recoil cord.

It’s a rare problem, but it can happen if something happens to the camshaft compression release.

Fixing such a problem requires you to tear down the entire generator and disassembly the engine, which won’t be that easy. If you’re not experienced with small engines, consider taking the generator to a mechanic to have it fixed.

Why does my generator backfire when I try to start it?

Your generator can backfire because the engine is receiving gasoline-rich or air-rich fuel mix, early or late combustion, or when the intake or exhaust valves get stuck.

Why is my generator not starting?

Your generator won’t start if you are using stale gas, there is water in the fuel tank, the choke is ON position, or there is no enough oil in the crankcase. Those are some of the reasons your generator might not be starting. I have a whole article on this here.